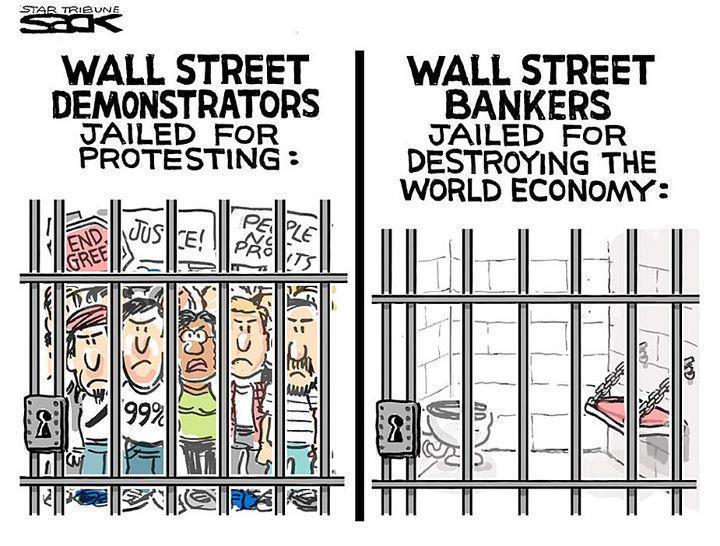 In a news article last week, JP Morgan Chase was reported to have hit another low that scares me, because they own many of our retirement accounts. JP Morgan Chase just paid a huge fine to the feds and admitted that they sold off their investments with Bernie Madoff when they suspected he had a Ponzi scheme going, but they continued to buy these investments for their customers. No jail time was given.

If companies are individuals and can give campaign contributions, then a person or persons at the bank should be held responsible for this and serve jail time, don’t you think? Regardless, I’m glad to see the feds step in and get the billion dollar fine and are going to get it to the people who lost all their money buying these investments. The problem is, what will the bank do to help absorb the cost of the fine? Raise our fees, adjust salaries to the detriment of the workers.

Jail is a better deterrent of corporate wrongdoing.

I have no problem with business, in fact, I think trade and business is what has got us here today, the best time for the average human being around the world, in the history of the world. What I have a problem with is a business that is shielded from responsibility or government leaders who accept their money in exchange for favors. Why not let us change our leadership? Maybe vote for someone without the word “Democrat” or “Republican” after their name?

Why protest when we can simply vote?

Things fade into the background if they’re no immediate danger to us. The aging nuclear power plant that provides power but is not in compliance with safety regulations and sits near an earthquake fault line (like the Indian Point nuclear reactor outside of NYC). Or the cost of war in lives and money that doesn’t effect you… yet. Or the bank that continues to go into debt making risky bets because the government bailed them out by also going into debt. And without making cuts in government services…yet.

Last week the CEO of JP Morgan Chase, Jamie Dimon, made an interesting announcment. The company lost over $2 billion dollars continuing their risky betting. Now, this is a fraction of their hundreds of billions of dollars in income. (Income, not profit: They have 3 times as much debt as assets.) So is Dimon preparing us for worse to come? Maybe. Or is he trying to establish an environment of acceptance of risky betting? Dimon said the investments were a “terrible, egregious mistake” but “we maintain our fortress balance sheet and capital strength to withstand setbacks like this.” Was this a PR move to instill trust in a market that is losing it?

In 1912, JP Morgan, the founder of this company, was speaking in a testimony with Congress. He was asked whether banking debt is based on money or property.
He answered that it was about character, “before money or anything else. Money cannot buy it…Because a man I do not trust could not get money from me on all the bonds in Christendom.”

Do you trust a market where you buy things like a television? How about a market that buys…money? There’s a big difference that needs to be appreciated. One is in the business of creating cheap goods and services for money. The other is in the business of creating money. One is less government driven and difficult to corrupt, while the other is more government driven and much easier to corrupt. What they have in common is that the consumer decides whether to buy their goods or services.

And that consumer is you and me.

How would you rate the following in importance?

-Tax breaks for gay and straight married couples
-Wall Street banks paying fines a fraction of the $30 trillion the government loaned them to keep their collapse from taking down our economy.
-Government money to cover contraception

What do we need to focus on? All of these involve controlling money. Is that the problem?

The money isn’t the problem. It’s how the government is engineering the country as if money is our only motivator.

Good leaders trust the human spirit, not carrots and sticks

Good leaders don’t use regulations and incentives. But our leaders are doing so today. They’re trying to regulate Wall St bankers to prevent their recklessness from hurting us again in the future. But regulations restrict us and push us to find a way around them. That is why three times since 1990, the banks have almost collapsed and why the government bailed them out each time. If you knew you were going to get your money back, would you be more or less careless when spending it?

And incentives? Incentives bribe us. Research shows that when you start giving rewards, people are pretty predictable. They stop doing for the sake of doing, and shift to doing for the reward. When you start going to work so that you can get money to buy stuff, the stuff becomes the reward and the job becomes less of a choice.

We’re not animals. But if you use carrots and sticks on us, we will tune our motivations to that type of environment

How can these two things be the foundation of leadership, of government, of a community?

Are there any leaders today that inspire you? Most leaders of today aren’t going to be the people in government. Those who seek power in a system that has been compromised have compromised themselves. Granted, they may change some things. They may nibble at the fringes. But that cancer still grows inside.

Despite what media and culture tells us, leaders aren’t special. They aren’t chosen by divine providence or fate. They don’t have abilities different than you and me. Do you empower others? Ask people what they think? Do you encourage people? Then you’re probably a leader, or you can become one now that you see what it takes.

“A leader is best when people barely know he exists, when his work is done, his aim fulfilled, they will say: we did it ourselves”

Let’s kill the noise and start listening to reality

Elections are where we can flex our muscle. But we’ve got to do our homework before then. Listen to what’s being reported. Do you think it’s important? We’ve got to talk to people and not be afraid to ask them why they believe what they do. Your neighbor isn’t stupid or lazy, and neither are you. Politics isn’t personal. It’s what a community depends on for its survival! And if we think one party or one person can fix this country, we’ve missed the point. This country is here because people had the courage of their convictions to join together and risk everything for what they believed in.

I think we can step up and be leaders again.

Why is there apathy? Meslin says it is because our environment encourages it. Apathy is in our nature, just like our determination, selfishness, and kindness. But our environment is a powerful promoter, of both good and bad traits. Meslin describes how society makes it hard to to be active in your community, how media depicts heroism as being for the chosen few, and how the system makes political involvement uninspiring and the political process complicated and manipulative.

“As long as we believe that people, our own neighbors, are selfish, stupid or lazy, then there’s no hope.”

Meslin made me realize that the bigger and more complicated our system grows, the more apathy will creep into our actions. If we can see that the system we are building is making our future both easier and impersonal, we can change it. In effect, we must save us from ourselves. And in a society so free, if we do not, we only have ourselves to blame.

So let’s reach out and empower ourselves. Start buying more from the people in our community. Let’s not give our money to careless and dishonest Wall Street bankers. Let’s vote less for the two parties and more for the third party that hasn’t been compromised by money. We can make the change. As Ghandi said,

“Be the change you want to see in the world.”

Your neighbor isn’t stupid or lazy.

And neither are you.

If this is something you care about, then SHARE it. Let’s get out of the stands and into the game. Let’s interact.